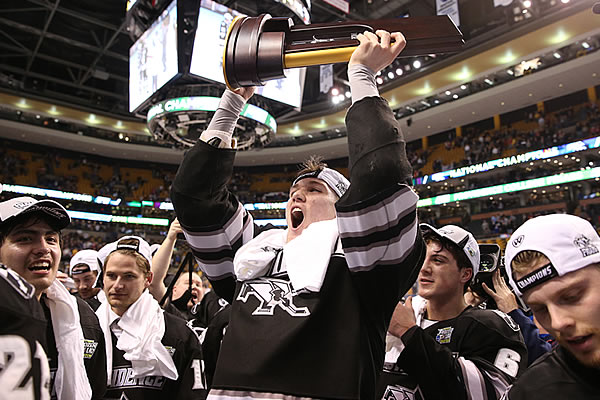 Sixty schools sponsor NCAA Division I men's college hockey, competing in six conferences and for the national championship every year at the NCAA Frozen Four.

The universities that participate are some of the finest in the world, and the level of hockey is second to none. College hockey players receive more than $30 million annually in athletic scholarships and are a primary feeder system for the NHL. Approximately one-third of all NHL players - a total of 310 in 2017-18 - develop in the college ranks.

The atmosphere at a college hockey game is truly unique thanks to raucous student sections, energectic pep bands and timeless traditions. Teams also participate in special events, from rivalry games throughout the season to tournaments at NHL arenas like the Beanpot and the Great Lakes Invitational. Outdoor games are a staple of the college calendar, and the season ends with a celebration of the sport at the NCAA Frozen Four.

College hockey honors its best players with conference awards and All-America accolades, as well as the Hobey Baker Memorial Trophy. Named after an American war hero and the best hockey player of his time, the Hobey is given annually to the top player in the game.

NCAA Hockey also includes more than 70 schools that compete at the Division III level, which offers high-level hockey but without athletic scholarships. Six schools compete in Division II, though that does not crown a national champion.