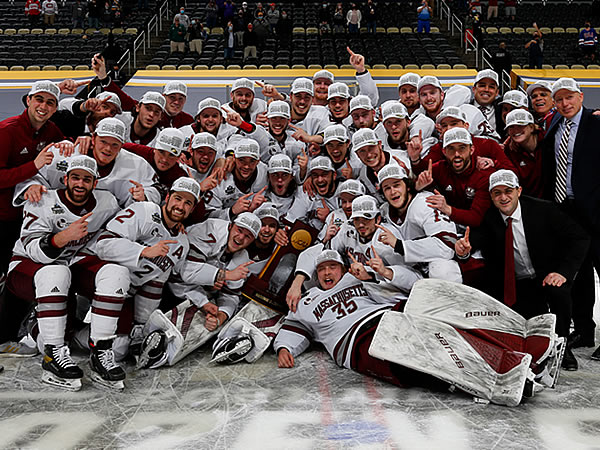 The NCAA crowns its national champion at the culmination of the college hockey season, the Frozen Four, each spring. Held before sellout crowds at NHL arenas, the Frozen Four consists of the two semifinal games and one championship game, played over three days.

After a one-year absence due to the COVID-19 pandemic, the Frozen Four returned in 2021 with a first-time champion, Massachusetts. The Minutemen claimed the national championship with a decisive 5-0 victory against St. Cloud State in the title game at Pittsburgh’s PPG Paints Arena. The semifinals were two one-goal games – one decided in the final minute of regulation and the other in overtime.

Over time, the Frozen Four has become more than just the games – it's a weekend long celebration of college hockey. Thousands of fans attend year after year, regardless of the teams involved, creating crowds filled with dozens of different jerseys. On the day between games college hockey celebrates some of its best, with the presentation of the Hobey Baker Award, the Hockey Humanitarian Award, the Mike Richter Award and the AHCA All-America Teams.