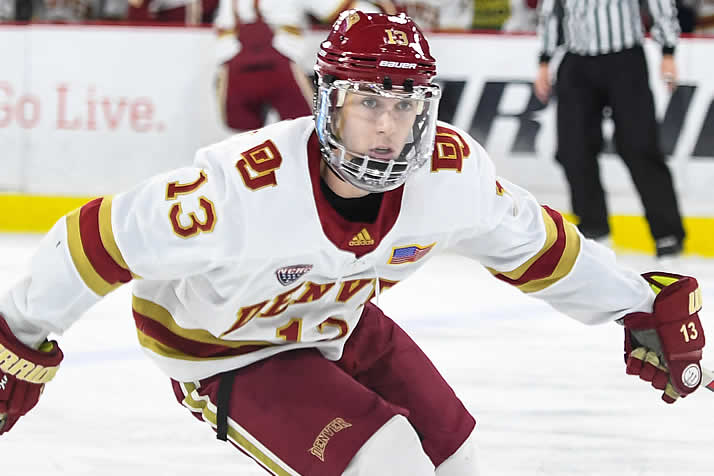 Denver stands 4-0-0 including three come-from-behind wins. The Pioneers ascended to No. 1 in the polls entering this weekend's home series with No. 6 Boston College. Four players are averaging a point per game for the Pioneers, led by senior Liam Finlay (Kelowna, B.C./Vernon-BCHL) with five assists through four contests. Finlay, who led DU with 36 points last season, is among five of the top six scorers on that team to return to campus in 2019-20. | Saturday's game is on Altitude/NESNplus

Northeastern's senior leader – The lone senior surrounded by freshmen and sophomores on Northeastern's defense, Ryan Shea (Milton, Mass./Youngstown-USHL/CHI) plays big minutes and a key leadership role for the Huskies. The captain has led NU to a 3-0-0 start entering Saturday's visit from Holy Cross. Shea has played every game since arriving on campus, and his 118 career games played is equal to the combined total of the other five Husky defensemen who dressed in Tuesday's win over No. 4 UMass. | Saturday's game is on NESNplus

Brothers leading Alaska – Alaska opened its WCHA schedule with a weekend sweep at Michigan Tech, with sophomore defenseman Chris Jandric (Prince George, B.C./Vernon-BCHL) recording the game-winner in each contest. Chris and his brother, junior forward Steven Jandric (Prince George, B.C./Vernon-BCHL), have combined for three of the Nanooks' eight goals through four games this season. Alaska is in the midst of a six-game road stretch, traveling to Penn State this week for a Thursday-Friday series against former UAF head coach Guy Gadowsky.

Well Dunne – Clarkson, after a 1-0-1 start at Michigan, hosts Vermont and Providence this weekend. Sophomore Josh Dunne (O'Fallon, Mo./Green Bay-USHL) had points in each game at Yost Ice Arena and leads the Golden Knights in scoring with three points. Dunne is one of six hockey-playing siblings including older sister Jincy, a senior captain at ninth-ranked Ohio State.

Spellacy spells success for RMU – Robert Morris completed a sweep of Bentley to open its Atlantic Hockey schedule thanks in part to a first career two-goal game from sophomore Aidan Spellacy (Lakewood, Ohio/Lone Star-NAHL). Spellacy – a former NAHL Robertson Cup champion with the Lone Star Brahmas – scored twice on the power play and added an assist in the Colonials' win Saturday, giving them an early lead in the Atlantic Hockey standings after the first two conference games of the year.

2019 Hobey Baker Award winner Cale Makar's five-game point streak is one game shy of the longest by a defenseman to begin his career. | NHL Matchup Tool