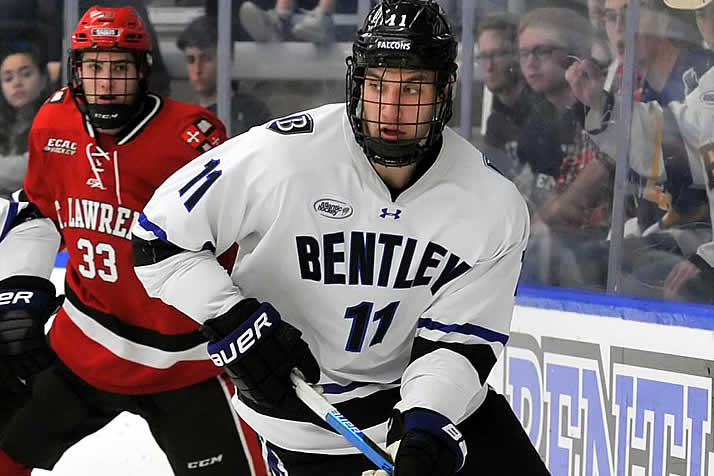 Sophomore Jakov Novak’s nine goals are only three shy of the national lead.

Bentley and Army West Point have both won three in a row entering their series in West Point this weekend. The Falcons have been led by sophomore Jakov Novak (Windsor, Ont./Janesville-NAHL/OTT), one of two NHL draft picks in Atlantic Hockey (Army's Matt Berkovitz-ANA is the other). Novak's nine goals are three off the national lead and include three game-winners. He scored in both games as Bentley swept Holy Cross in a home-and-home last weekend.

Humboldt survivor thriving at UAA – Alaska Anchorage is 2-1-2 when it scores more than a goal, and a large freshman class has been providing a significant amount of that offense (52% of the team's goals). One of those freshmen, Brayden Camrud (Saskatoon, Sask./Humboldt-SJHL), chipped in the shootout winner Saturday vs. Ferris State. Camrud is a survivor of the 2018 Humboldt Broncos bus crash who has made a big impact in his rookie NCAA season, posting six points through his first 13 games. | WCHA.com: The blink of an eye

Michigan Mann – Goaltender Strauss Mann (Greenwich, Conn./Fargo-USHL) got Michigan in the Big Ten win column Sunday with a 28-save effort at Wisconsin. Mann split Michigan's goaltending duties as a freshman but has assumed the No. 1 role this year and excelled, posting a .927 save percentage. Mann, whose unique first name comes from his grandmother's maiden name, won national championships at the 18U level (Mid-Fairfield Rangers) and the USHL (Fargo Force) prior to attending Michigan. | Friday's game is on FS1

Another Kelleher leads UNH – Among the offensive catalysts for 7-6-1 New Hampshire is a familiar name: Kelleher. Junior Charlie Kelleher (Longmeadow, Mass./Sioux City-USHL), whose brother Tyler led the Wildcats in scoring for two seasons, is averaging a point per game through 14 games. Charlie has five multiple-point games, including each of the first three games of the season. UNH faces Merrimack in a home-and-home series this weekend. | Friday's game is on NESN

Washe emerges for WMU – Western Michigan has battled injuries this season, with only one of the Broncos' top six scorers appearing in all 14 games. That's leading scorer Paul Washe (Clarkston, Mich./Fargo-USHL), and the junior has five multiple-point games among his seven goals and seven assists. Those totals already mark career highs in goals and points for Washe, who totaled 19 points in his first two seasons combined. His increased production bodes well for WMU, which stands 3-2-1 in NCHC play despite its injury troubles.

Cayden Primeau, the 2019 Mike Richter Award winner, was recalled by Montreal Monday. He could become the 23rd player who spent 2018-19 in NCAA hockey to appear in the NHL. | NHL Matchup Tool

Four NCAA players were named to Canada's selection camp for its National Junior Team … No. 9 Notre Dame and No. 10 Boston College play a Friday-Sunday home-and-home this weekend … Six games are on national/regional sports networks this weekend.