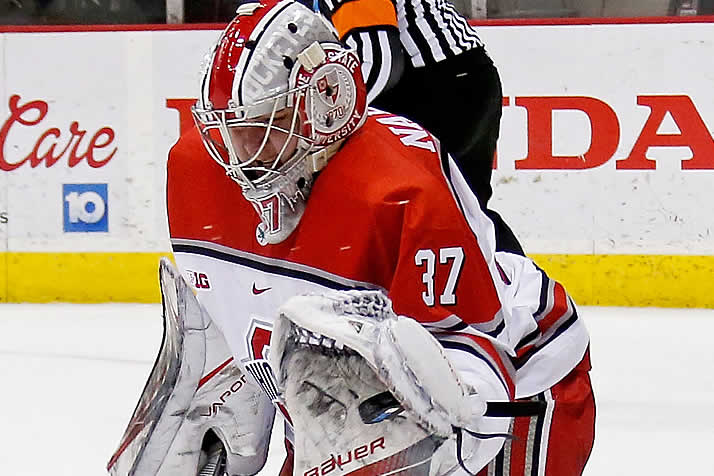 Tommy Nappier ranks third among active goaltenders with a .936 career save percentage.

Ohio State heads to Wisconsin at 7-1-1 in its last nine. The Buckeyes have thrived in close games, ranking second nationally in one-goal games (11) and one-goal wins (7), thanks in part to steady goaltending from junior Tommy Nappier (St. Louis, Mo./Omaha-USHL). Nappier's .933 save percentage ranks ninth nationally; he has allowed two goals or fewer in six of his last seven starts. | Friday's game is on ESPNU; Saturday's is on SportsTime Ohio and FOX Sports Wisconsin

The Athletic: SoCal Clash gives glimpse into local college hockey potential
The Athletic: How BU's Zegras made passing cool at the world juniors
Grand Forks Herald: Stories from covering all 436 UND games in the decade
The Rink Live: The top college hockey programs of the 2010s
College Hockey News: Best of the decade: Top 25

NMU's big scorer – The nation's leading goal scorer stands just 5-foot-7, 145 pounds, but Griffin Loughran (West Seneca, N.Y./Fargo-USHL) has had a huge impact for Northern Michigan. The sophomore has scored a goal in 13 of 20 outings for the Wildcats, including three tallies in last weekend's sweep of Bowling Green. The former Clark Cup champion with the Fargo Force has enjoyed a big spike in production from a solid freshman season (7-11—18 in 35 GP).

Yale's Hall of fame – Yale is 5-1-0 after a 2-7-0 start entering its Madison Square Garden meeting with Harvard on Saturday. Sophomore Curtis Hall (Chagrin Falls, Ohio/Youngstown-USHL/BOS) scored the tying and winning goals for the Bulldogs Tuesday at Vermont. It made for an impressive return for the Bruins prospect, who spent the holidays with the U.S. National Junior Team at the World Junior Championship. He leads Yale with eight goals in 10 games.

BC's shining Knight – Boston College has won a national-best 10 games in a row and welcomes back another World Junior Championship participant, freshman goaltender Spencer Knight (Darien, Conn./U.S. NTDP/FLA), for this weekend's home-and-home with Massachusetts. Knight, who at No. 13 was the highest drafted goaltender in nine years, has met those high expectations with the Eagles. His .940 save percentage ranks fourth in the nation and he is the only freshman among the top dozen goaltenders.

SCSU's latest Brodzinski – St. Cloud State has turned things around after losing its top four scorers to pro contracts; the Huskies are 4-2-0 in their last six entering a series at Denver. Junior Easton Brodzinski (Blaine, Minn./Green Bay-USHL) is a proven offensive weapon who returned after scoring 30 goals in his first two seasons combined. He shares the team lead with seven goals and is coming off a game against his brother, Bryce, on Dec. 29 at Minnesota. Their two older brothers are both playing pro hockey, including Jonny, who starred at St. Cloud State and is currently with the San Jose Sharks organization. | Both games are on Altitude2

Holy Cross gets a spark – Logan Ferguson's (Calgary, Alta./Canmore-AJHL) five-point weekend gave the Holy Cross junior a new career high for points in a season (13) and helped lift the Crusaders to their first weekend sweep of the season. Holy Cross, which had averaged just over two goals per game entering the weekend, posted 11 goals in two games. Ferguson, who was a two-time team MVP with the AJHL's Canmore Eagles, has three multiple-point games in his last five outings.