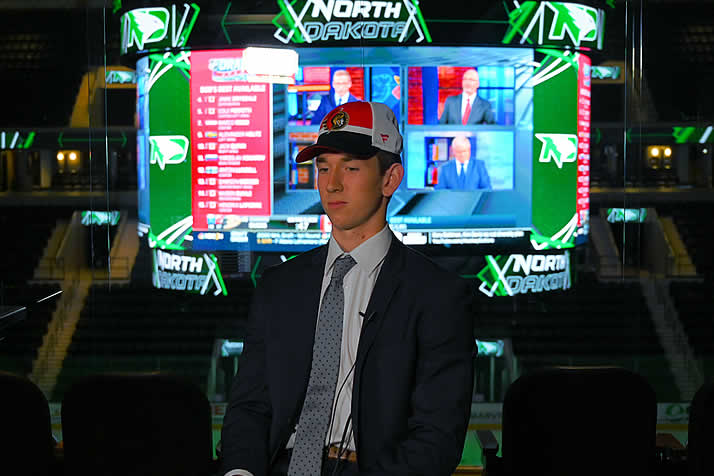 Ottawa selected a North Dakota defenseman in the first round for the second time in three years in Jake Sanderson (Photo by North Dakota Athletics).

Three NCAA players – a sophomore and two freshmen – were selected in the first round of the 2020 NHL Draft, conducted Tuesday night.

North Dakota freshman Jake Sanderson (Whitefish, Mont./U.S. NTDP) was the first college player selected at fifth overall by Ottawa. It marked the fourth straight year that an NCAA player was taken in the top five, and the second time in three years that the Senators selected a Fighting Hawks defenseman with a first-round pick.

With Sanderson (who played for USA Hockey’s National Team Development Program but was raised in Calgary) and Holloway, five Albertans playing NCAA hockey have been first-round picks in the last five years. Both players attended College Hockey Inc. Summits held in the Calgary suburb of Okotoks, Alta.

Michigan freshman Brendan Brisson wrapped up the first-round college selections at No. 29 to Vegas. Brisson, who played for the USHL’s Chicago Steel last year, gives Michigan a pick in 25 consecutive drafts, the longest active streak among NCAA teams (likely to be tied by Boston College on Wednesday).

A total of 176 NCAA players have been selected in the first round in the history of the NHL Draft.

Rounds two through seven of the 2020 NHL Draft will be held Wednesday beginning at 11:30 a.m. ET. Television coverage will be provided by the NHL Network in the U.S. and Sportsnet in Canada.