Storylines to Watch in Pittsburgh
UMD aims for three, while three teams look for their first title. 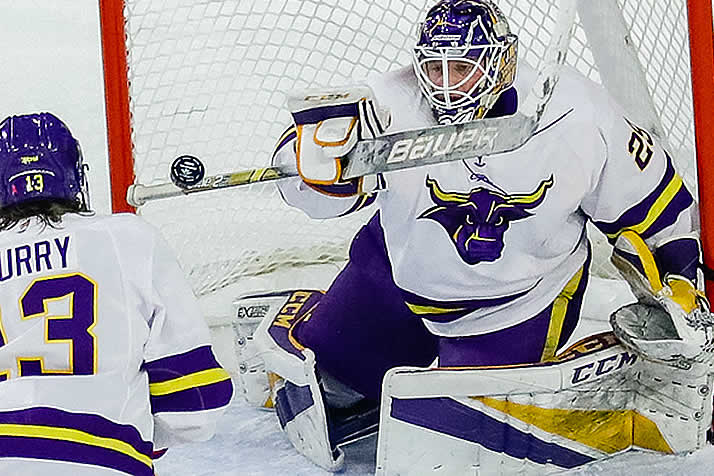 Dryden McKay is the lone Hobey Baker finalist to reach the Frozen Four.

The 2021 Frozen Four field features three No. 2 seeds (Massachusetts, Minnesota State and St. Cloud State) and a No. 3 (Minnesota Duluth), just the second time that the 16-team tournament has not seen a No. 1 seed reach the Frozen Four (2007).

The 2021 national champion will either be just the second team to win three in a row in Minnesota Duluth, or a first-time champion in Massachusetts, Minnesota State or St. Cloud State.

No team has won three straight since Michigan from 1951-53, and Minnesota Duluth could become the first school ever to appear in four straight national championship games.

Experience counts – Experience led to success in the 2021 NCAA Regionals, with the four Frozen Four teams featuring the most upperclassmen in the tournament field. Seniors accounted for more goals (25) than any other class, with juniors and seniors scoring 68% of all goals.


Future stars – Nearly half of all NHL teams (14 of 31) have draft picks in the Frozen Four (18 total), with several other free agent and 2021 NHL Draft prospects in the mix as well. Minnesota Duluth leads the schools with eight draft picks on its roster, while three NHL teams each have at least a pair of prospects in the field.


The roads traveled – A bit on the paths to Pittsburgh for each of the four semifinalists:

Massachusetts: Five members of the Minutemen’s 2019 Frozen Four team have since signed NHL contracts, but head coach Greg Carvel still guided his team back to the big stage. They enter on their third winning streak of four-plus games this year and haven’t lost since Jan. 18 (9-0-3 since). Junior goaltender Filip Lindberg has three shutouts in six career NCAA Tournament games, including in the Bridgeport Regional Final, and has matched Cory Schneider’s tournament career shutout record.

Minnesota Duluth: Minnesota Duluth is the only third seed in the Frozen Four and its 15-10-2 record is the weakest of the teams, but the two-time defending champions can hardly be considered an underdog. Experience from those titles has led the Bulldogs, with six juniors and seniors atop the scoring chart. They knocked off top-seeded North Dakota in the NCAA Tournament’s longest game ever (142:13) to win the Fargo Regional.

Minnesota State: After first-round losses in its first six NCAA Tournament appearances, Minnesota State broke through despite trailing Quinnipiac by two goals with six minutes to play. The Mavericks enter with the Frozen Four’s best record (22-4-1) and the nation’s best defense (1.52 goals against per game), led by goaltender Dryden McKay. McKay’s 10 shutouts this season and 24 in his career are both two shy of the respective NCAA records.

St. Cloud State: After losing in the first round of the last two tournaments as the No. 1 overall seed, second-seeded St. Cloud State rolled past Boston University and Boston College to claim this year’s Albany Regional. The Huskies were the runners-up in the NCHC and make their second Frozen Four appearance in the same city as their first (2013).


Men of Steel – The Frozen Four returns to Pittsburgh after its first visit to the city in 2013, when Yale won the national title (St. Cloud State also made it that year). It’s the third time in the last eight tournaments that the state of Pennsylvania has hosted the event. Typically around 10 NHL arenas host NCAA games during the course of the season; due to the pandemic PPG Paints Arena is the first to host a game this year.


European influence – A record 119 Europeans played Division I men’s hockey in 2020-21, and Europeans have had a profound impact for three of the four teams in the field. Finland produced Massachusetts starting goaltender Filip Lindberg and the top two scorers for St. Cloud State, Veeti Miettinen and Jami Krannila. St. Cloud State’s starting goalie, David Hrenak, is from Slovakia. Minnesota State’s leading scorer is a German for the fifth year in a row, this time junior Julian Napravnik (current Vancouver Canuck Marc Michaelis led the team in scoring each of the last four years).


Top of the heap – While none are No. 1 seeds this year, the Frozen Four teams have been among the nation’s best lately; in fact, they were the four No. 1 seeds in the most recent tournament, in 2019. Since the start of the 2017-18 season, they are four of the five winningest programs in the nation.


Tournament trends – Teams combined for 6.3 goals per game in the regionals, an average that would represent the highest scoring tournament since 2010 (6.7). The first round featured 7.5 goals per game. A few more trends in the 2021 tournament:


Balanced attacks – Only one player in the field has more than 30 points on the year (Massachusetts’ Bobby Trivigno, with 31), and none enter among the nation’s top 10 scorers (Trivigno is tied for 11th). Thirteen players have at least 23 points, however, with at least three per roster. Eleven players have double-digits in goals, led by Massachusetts’ Carson Gicewicz (17).


Family affair – The Sandelin family enjoyed a special few hours around midnight March 27-28, and will look to top it at the Frozen Four – though both father and son can’t win in Pittsburgh. Minnesota State sophomore Ryan Sandelin gave the Mavericks their first NCAA Tournament win with an overtime goal Saturday night, followed by Minnesota Duluth head coach Scott Sandelin leading his team to a win in the longest NCAA Tournament game ever early Sunday morning.

Massachusetts-Minnesota Duluth is a rematch of the 2019 NCAA championship game … Five players scored their first goals of the season in the regionals (including Massachusetts’ Anthony Del Gaizo and St. Cloud State’s Luke Jaycox) … The Frozen Four teams went a combined 1-for-18 on the power play in the regionals (5.6%, with UMass scoring the goal) … Nine players had multiple-goal games in the regionals, more than either of the last two tournaments … Three goals were scored with an extra attacker on the ice in the regionals.

Massachusetts: Led the nation in points from defensemen (84) and its 23 goals from the blueline trails only Quinnipiac (24) … UMass is the one team of the four to win its conference tournament title … The least penalized team among the four (9.44) … Carson Gicewicz’s hat trick in the regionals was the first in the NCAA Tournament since Jarid Lukosevicius’s in the 2017 NCAA title game … Marc Del Gaizo was a member of the 2019 All-Tournament Team.

Minnesota Duluth: UMD’s first tournament game in each of its last five tournaments has gone to OT … Has won nine straight overtime games in the NCAA Tournament, dating back to 1985 … Its eight Frozen Four appearances are more than the other three teams combined (five) … The only one of the four teams that was in Division I as recently as the mid-1980s … The Bulldogs share the national lead with three hat tricks this season, from three different players (Jackson Cates, Cole Koepke, Nick Swaney) … Swaney is the only 100 career point-scorer in the field … Scott Sandelin’s .786 tournament winning percentage ranks fourth all-time; his 22 career wins are tied for fifth all-time with Ron Mason and Don Lucia.

Minnesota State: The one team of the four to win its conference regular-season title … The nation’s oldest team on average (23.0) … McKay is the lone Hobey Baker finalist to make it to Pittsburgh, despite all 10 making the tournament … The eighth school in the last 10 tournaments to reach its first Frozen Four … The top faceoff team among the four (55.3%, second in the nation) … The only team among the four with a perfect record when scoring first (18-0-0) and leading after two periods (19-0-0) … Led the nation with 1.52 goals per game in the second period … Has nine players with 100-plus career games played, most of the four teams.

St. Cloud State: Led all teams with 10 goals in the regionals, including Jami Krannila’s penalty shot tally, the first NCAA Tournament penalty shot goal in at least 10 years … Won nine one-goal games, most of the four teams … Four freshmen were tied for the fewest in the nation … Brett Larson was an assistant coach on Minnesota Duluth’s first two national championship teams.