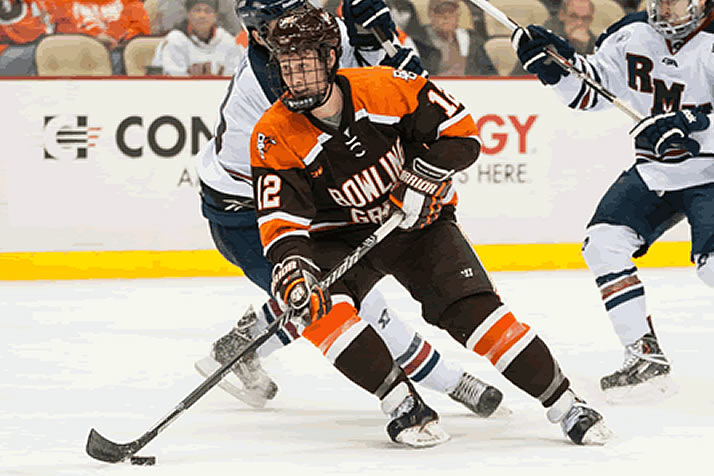 Virtually every college freshman sees his point total decline from his last year of junior or high school hockey as he adjusts to the bigger, stronger and faster competition.

Not many, however, see that drop hit the triple digits. So it was for Bowling Green’s Bryce Williamson (Seba Beach, Alta./St. Albert-AJHL), whose remarkable, 107-point final season in the AJHL was followed by a 7-point rookie NCAA season.

Thanks to hard work, rapid development and maturity, Williamson has increased that point total all four years at Bowling Green. Now he’s an offensive catalyst and the team’s second-leading scorer, putting them in contention for home-ice in the WCHA playoffs entering the season’s final two weekends.

For Williamson, it’s more than one thing that has led to his development.

Those bigger, stronger, faster players that Williamson encountered when he arrived on campus were a big part of his progression – and now he’s among that group.

“Playing against good teams and against good players in practice every day really helped,” he said. “Those opportunities to test yourself force you to become a better player.”

As the season winds down, it’s not just Williamson who is enjoying more success than ever. The Falcons, at .500, have a chance to post the program’s best record since the mid-1990s.

Williamson is the top performer in an eight-man senior class that has already left its mark at BG.

“Our senior class has worked so hard to help turn things around here,” he said. “I think coming into this year, we really focused on not having any regrets – try to be the best team we could be.

“I’m thankful for all the time I’ve had here. I don’t want it to end any time soon.”