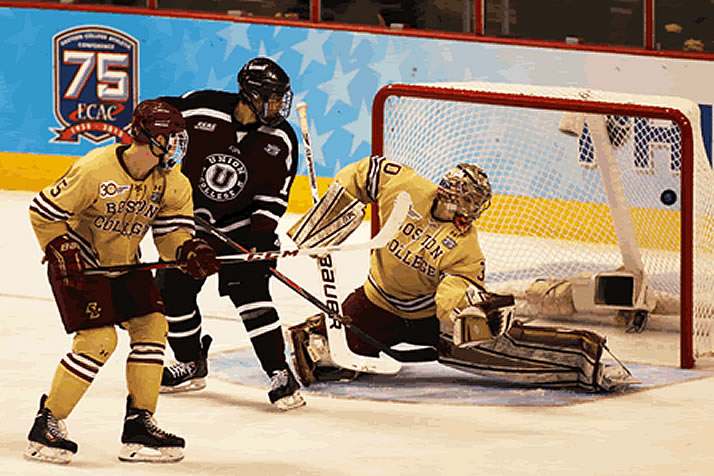 Union's Daniel Ciampini deflected in one of his three goals against BC (Photo by Larry Radloff).

Minnesota and Union won a pair of classic semifinal games Thursday night at Philadelphia's Wells Fargo Center, setting up their meeting for the NCAA championship on Saturday night.

Union beat Boston College in Thursday's first game, 5-4, as Daniel Ciampini's (Concord, Ont./St. Michael's-OJHL) hat trick helped the Dutchmen overcome a three-point effort from Johnny Gaudreau (Carneys Point, N.J./Dubuque-USHL/CGY). The teams combined for 79 shots on goal in the game and traded three goals in the final 2:45 in a hectic finish as Union advances to its first national championship game.

Minnesota will play for its sixth NCAA championship after Justin Holl (Tonka Bay, Minn./Minnetonka HS/CHI) scored a buzzer-beating goal with just 0.6 seconds on the clock. That goal - Holl's first of the year, and coming shorthanded - lifted the Golden Gophers to a dramatic 2-1 win.

The championship game features the top two teams in the national polls entering the Frozen Four - each was ranked No. 1 in one poll. Union has won 11 in a row and is unbeaten in its last 15 games.