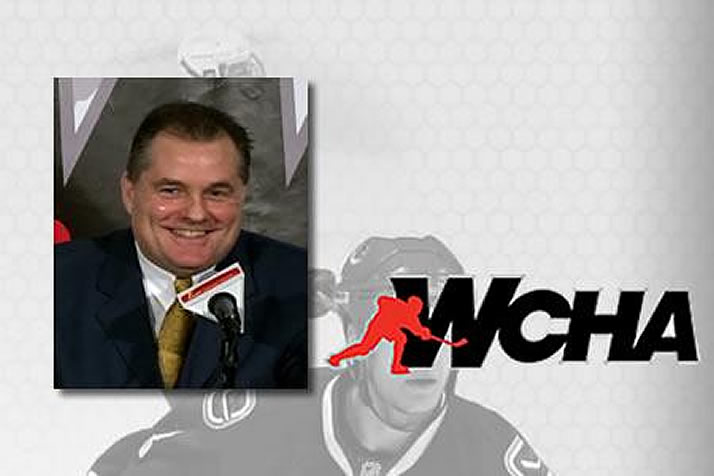 The WCHA announced Tuesday that Bill Robertson has been selected as the new commissioner of the conference. Robertson, 53, succeeds Bruce McLeod, who has served as WCHA Commissioner for the past 20 years and is retiring in June.

"I am excited about this wonderful opportunity to help lead and guide the WCHA for many years to come," said Robertson. "It is truly an honor to serve this iconic sports and collegiate hockey conference, while showcasing some of the top student-athletes and institutions in the country."

The committee conducted a national search with the assistance of Parker Executive Search based in Atlanta.

"We are thrilled to announce Bill Robertson as the next commissioner of the WCHA," said Dr. Richard Davenport, President of Minnesota State University, Mankato, who led the search committee. "He has been a champion of collegiate hockey and a strong partner of the WCHA for many years. Bill is a proven leader and expert communicator with tremendous experience developing sports organizations and events across the country, including the WCHA Final Five. His knowledge of the organization, passion for the game, and respect for the collegiate experience make him a great choice to shepherd this new era for the WCHA."

The WCHA Final Five playoff championship returned to Saint Paul and its new Xcel Energy Center in 2001, where Robertson was Vice President of Communications and Broadcasting for the NHL's Minnesota Wild and parent company Minnesota Sports & Entertainment from 1999-2011. During that time, he helped establish the franchise and the events it hosted, and led media relations, community relations, publications and broadcasting efforts, along with league and broadcast schedule negotiations. Robertson negotiated television broadcast agreements on behalf of the WCHA from 2001-2011.

"Bill Robertson is an outstanding choice as the next Commissioner of the WCHA," said Xcel Energy Center Vice President and General Manager Jack Larson. "He is recognized as an exceptional leader in the sports industry and will no doubt do phenomenal things for the conference."

The WCHA Final Five playoff championship will be back in Saint Paul for the upcoming 2014-15 season, with dates set for March 20-21 at Xcel Energy Center.

"The Western Collegiate Hockey Association made a great choice. Bill's years of experience in professional and amateur hockey have allowed him to develop tremendous relationships at all levels of hockey," said Mike Snee, executive director of College Hockey, Inc. "He also understands both the significant history of the WCHA as well as the opportunities the league has in the future."

Prior to the Wild, Robertson directed communications for MLB's Anaheim Angels, the NHL's Mighty Ducks, and the NBA's Minnesota Timberwolves and Target Center, which hosted several NCAA Championships during his tenure. He also twice served as media relations liaison for both USA men's and women's Olympic ice hockey teams (Salt Lake City 2002, Torino 2006). Most recently, he consulted on sports and entertainment matters for Tunheim, one of the most respected strategic communications firms in the Midwest.

"We're delighted with the selection of Bill Robertson," said Dave Ogrean, executive director of USA Hockey. "We wish Bruce the best in retirement and look forward to having Bill lead a league that has such rich history and has been an important part of the hockey landscape in our country for a long time."

Robertson, who will begin his position as Commissioner of the WCHA mid-May, is from Saint Paul, Minn. He is a graduate of California State University - Fullerton where he majored in Speech Communications. He becomes only the third commissioner in the WCHA over the past 30 years, following successful tenures for Otto Breitenbach (1984-94) and Bruce McLeod (1994-2014).

"A love of hockey, a greater love for people and helping them be better, describes Bill Robertson," said Craig Button, former NHL General Manager and currently the lead television analyst for the NHL Network. "The WCHA has a long-standing history of providing opportunity to young scholar-athletes who have represented their educational institutions both on and off the ice in exemplary fashion. Some have gone on to careers in the NHL but all have been given an opportunity to learn and grow. Among many who come to mind is David Backes, a former player at Minnesota State, U.S. Olympian and current St. Louis Blues' team captain.

"Bill has a record of helping organizations get off the ground and grow and has been recognized on numerous occasions for his and an organizations' leading accomplishments. The WCHA is not new but the league is entering a new era. Bill is a man who can lead them as they establish themselves as a place for young men to grow, develop and contribute to their institutions as hockey players and as citizens throughout their adult life. Bill understands the meaning of 'give and you shall receive,' but it is in his daily and tireless efforts where it is exemplified. I can't think of a more deserving person to take the reigns as WCHA Commissioner. Great days are ahead."