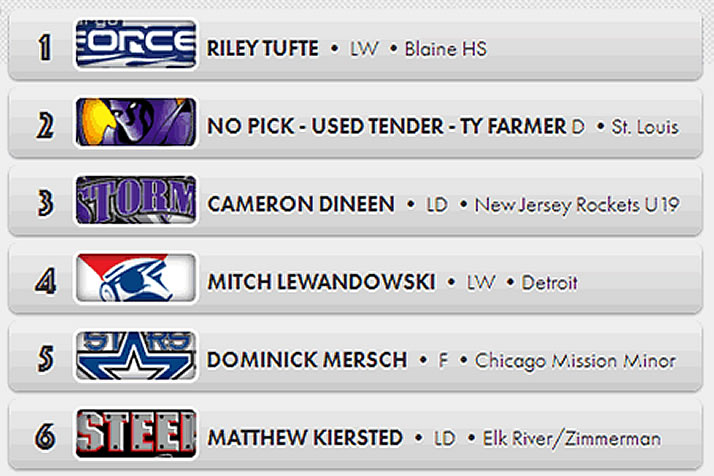 Phase 1 of the 2014 USHL Draft saw dozens of 1998-born future college stars selected by USHL clubs, led by Minnesota Duluth recruit Riley Tufte, who was taken No. 1 overall by the Fargo Force.

About the Draft | Phase I Results | Follow Phase II Tuesday

In all, 22 of the 124 selections made Monday have already committed to schools, which is well more than half of all 1998-born commitments nationwide. Sixteen schools had recruits selected in Phase 1 of the draft, led by Maine and Michigan State with three each.

USHL teams also had the ability to sign up to two 1998s to tenders, with those who did so forfeiting picks in Phase 1 of the draft.

Phase 2 of the draft takes place Tuesday. In this phase, USHL teams will select players from multiple birth years as they look to fill their protected lists with players who will compete for roster spots for the 2014-15 season. Phase 2 continues until all USHL teams have secured 45 players on their Initial Protected List. That list includes affiliate players from the 2013-14 season, players selected in Phase 1, and players signed to a tender.