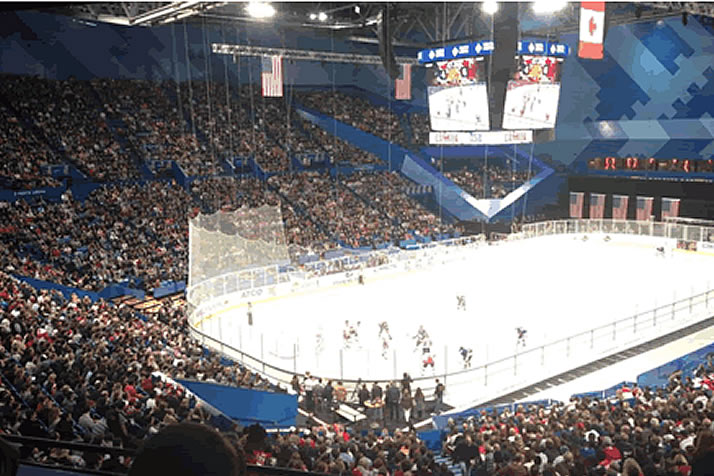 A large crowd saw Canada win the first game of the series, 9-6, in Perth (Photo via @PerthArena on Twitter).

Two teams of Americans and Canadians - including more than a dozen NCAA alumni - are enjoying more than a typical hockey offseason. Instead, they've traveled to Australia, where they are playing a five-game exhibition series across the country.

The Canadians won the first game of the series, 9-6, Friday in Perth, Australia, in front of a huge crowd. Gordon had a hat trick to lead his team.

Cole is one of three Notre Dame alums on the U.S. team, including goaltender Steven Summerhays, who skated for the Fighting Irish this past season. All of the players have pro experience including a handful - like Cole and Gordon - who have played in the NHL.

The tour, which is the third of its kind, comes as interest in hockey in Australia is peaking. The Australian Ice Hockey League features eight teams with a game of the week broadcast nationally. Last month the first Australian-born player was taken in the NHL Draft: Nathan Walker by the Washington Capitals. Walker will join the American team on this tour once Capitals development camp concludes.

The two teams play again Saturday in Perth before visiting Brisbane, Melbourne and Sydney in the next two weeks.