Notes: Union's Staying Power
Stevens has the Dutchmen near the top of the polls again, plus much more in this week's notebook. 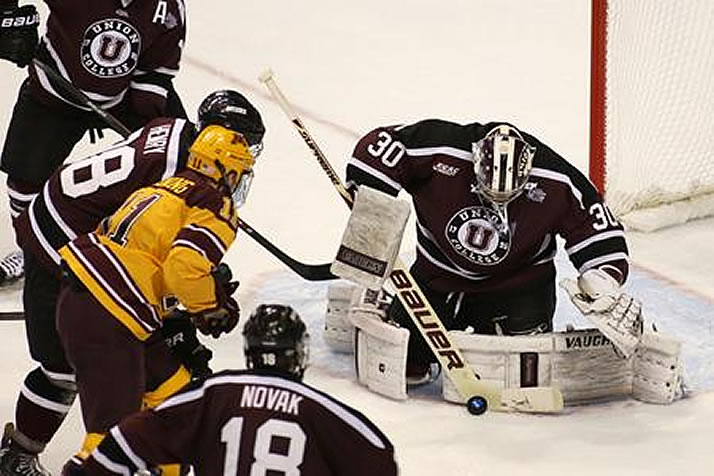 Colin Stevens was a second-team All-American in his first season as a starter last year (Photo by Larry Radloff).

Union lost three first-team All-ECAC Hockey selections from last year’s national championship team, but the one who returned – senior goaltender Colin Stevens (Niskayuna, N.Y./Boston Jr. Bruins-EJHL) – has already proven his value. Stevens, who grew up attending Union games as a fan, posted a .933 save percentage in two wins last weekend and leads the No. 2 Dutchmen on the road for a series at Maine this weekend.
Friday’s game will air on FOX College Sports

Homecoming and a reunion – RIT expects a sellout crowd of 10,000+ for its annual Brick City Homecoming game at Blue Cross Arena in Rochester, this year against Boston College. BC head coach Jerry York coached RIT’s Wayne Wilson and Brian Hills when they were undergrads at Bowling Green. Wilson began his coaching career as an assistant to York at his alma mater and is now in his 16th season leading the Tigers, who opened a new on-campus arena last weekend.

Nagelvoort leads Michigan – Michigan hosts New Hampshire for two games this weekend after traveling to Durham last year, where then-freshman goaltender Zach Nagelvoort (Holland, Mich./Aberdeen-NAHL/EDM) made his college debut in a Saturday night win. That sparked an impressive season for the rookie that saw him rise from backup goalie to Edmonton Oilers draft pick by the end of the year. Now he leads the Wolverines into the goalie-rich Big Ten – all six teams return their No. 1 goaltenders this season.

Seventeen goals Tuesday night – including all five by the San Jose Sharks and all three in the NJ-TB game – were scored by NCAA alums.