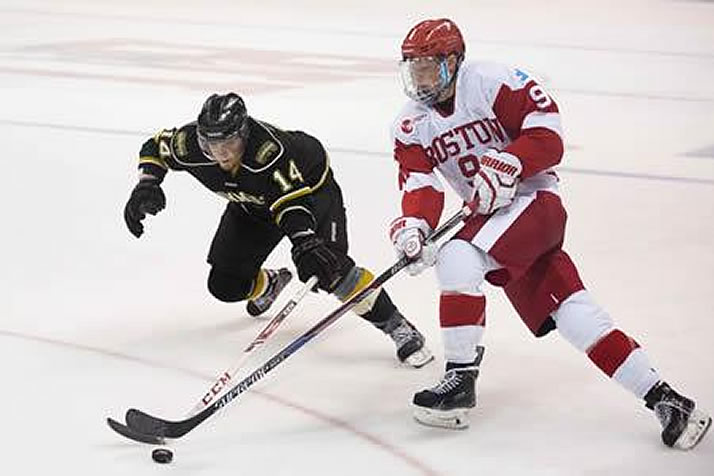 Jack Eichel has recorded 1.80 points per game entering Friday's contest at BC.

Arentz steps up for BSU – Sophomore Nate Arentz (Lakeville, Minn./Fargo-USHL) powered Bemidji State to a sweep of Alaska last weekend with three goals, matching his total from all of last year. Despite that relatively quiet rookie campaign, head coach Tom Serratore plugged Arentz in at center between two of his most dangerous forwards, Brendan Harms (Steinbach, Man./Fargo-USHL) and Markus Gerbrandt (Edmonton, Alta./Fort McMurray-AJHL). That trio leads the 3-3-0 Beavers – whose losses are to No. 1 Minnesota (twice) and No. 2 North Dakota (in a split) – into a series at WCHA preseason favorite Minnesota State this weekend.

Quinnipiac powers forward – Nine power-play goals from six players have fueled Quinnipiac’s 3-2-1 start entering ECAC Hockey play this weekend against Colgate and Cornell. The Bobcats rank second nationally with a 31.0% power play, and in those wins they have been even more impressive (35.3%). Sophomore Sam Anas (Potomac, Md./Youngstown-USHL) leads the team with three PPGs and 44 shots – more than twice as many as any teammate and 22% of the team’s total.

Badgers seek offense – Wisconsin opens its home slate this weekend and hopes to find some offense after an 0-4-0 start in which it scored just three goals. The Badgers lost more of their offense to graduation and NHL contracts than any other team, but can expect increased contributions from senior Joseph LaBate (Eagan, Minn./Holy Angels-USHS/VAN). LaBate’s goal total has grown in each of his first three seasons and the 6-foot-4, 210-pound center has shots in all four games without a point yet; he and the Badgers hope the shots start falling this weekend vs. North Dakota.

Heinen’s immediate impact – Denver freshman Danton Heinen (Langley, B.C./Surrey-BCHL/BOS) shares the Pioneer team lead in scoring after notching both goals in a 2-1 overtime win vs. Boston College Saturday. The rookie is accustomed to making an immediate impact – last year, in his first full BCHL season, he captained the Surrey Eagles and was the league’s rookie of the year.

Home sweet home for Bentley – After playing six of its first seven games on the road, with visits to Quinnipiac, Rensselaer and Penn State, Bentley (3-4-0 overall, 1-1-0 Atlantic Hockey) returns home this weekend and for eight of its next 10 games. The Falcons have a dangerous offensive club despite the graduation of Atlantic Hockey all-time leading scorer Brett Gensler. Senior captain Alex Grieve (Calgary, Alta./Westside-BCHL) leads the way, and he’s especially comfortable at John A. Ryan Arena. Grieve tallied 15 goals in 15 home games last season, sharing the national lead in home goals per game.

Minnesota head coach Don Lucia and his son, Notre Dame forward Mario (Plymouth, Minn./Penticton-BCHL/MIN) could have met in the Ice Breaker Tournament but didn’t; this weekend they face off twice (Friday on BTN, Sunday on ESPNU) … Connecticut hosts Boston College in its first home Hockey East contest Wednesday at Hartford’s XL Center and expects more than 7,000 fans … A number of teams, including Mercyhurst, are participating in Movember to raise awareness for men’s health issues.