Record Group Hoists Cup
The most NCAA alums ever to win the Stanley Cup led Pittsburgh to a second straight title. 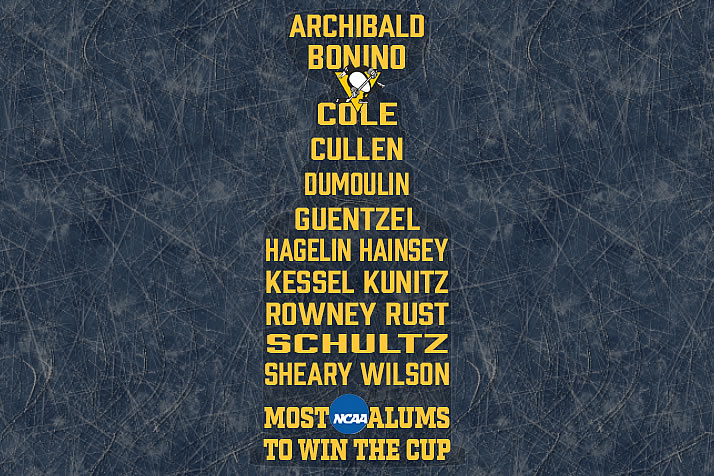 Fifteen former NCAA players dressed for the Pittsburgh Penguins in the Stanley Cup Final, the most for one team in history.

Sunday night those alumni hoisted the Cup, having led the Penguins to back-to-back championships with a six-game series win against the Nashville Predators.

A year ago Pittsburgh had 13 NCAA alums on its championship team, which tied the most all-time with the 1995 New Jersey Devils. This year’s group set a new standard thanks to the addition of rookies like Jake Guentzel, Carter Rowney and Josh Archibald as well as the acquisition of veteran Ron Hainsey.

NCAA alumni contributed not just in numbers but in impact as well. Fourteen of the 19 goals the Penguins scored in the Stanley Cup Final came off the sticks of former college stars.

The 15 players who appeared in the Cup Final represented 13 schools. Twelve of the 15 played three or four years of college hockey.

Pittsburgh featured 19 NCAA alumni during the regular season and 16 in the playoffs (the 15 who appeared in the Cup Final series plus Chad Ruhwedel). Both of those figures led all NHL teams this season.

Guentzel and Archibald – who were teammates at Omaha – become the first former Mavericks to win the Stanley Cup.

Guentzel, who finished his Omaha career just 15 months ago, led all players in the Stanley Cup Playoffs with 13 goals and tied an NHL rookie record with 21 points.

Cullen, 40, led all Penguins forwards in ice time in what may be his final game. The St. Cloud State product had nine points and won 56% of his faceoffs in the playoffs, winning his third Cup.

Ron Hainsey wins the Cup in the first playoff appearance of his career. He and fellow former UMass Lowell star Scott Wilson will get their names on the Cup, and could be joined by Ruhwedel, who played six playoff games but did not appear in the final series. They will join Craig MacTavish (four Cups) as the only former Lowell players to get their name on the Cup.

Notre Dame also had multiple players on the Penguins, with Cole and Rust each winning for the second year in a row.

Former BU captain Mike Sullivan guided the Penguins as head coach, one of many college connections in the Penguins’ front office. Sullivan, who is one of six former NCAA players to be the head coach of of a Stanley Cup champion, is the first to do so twice.