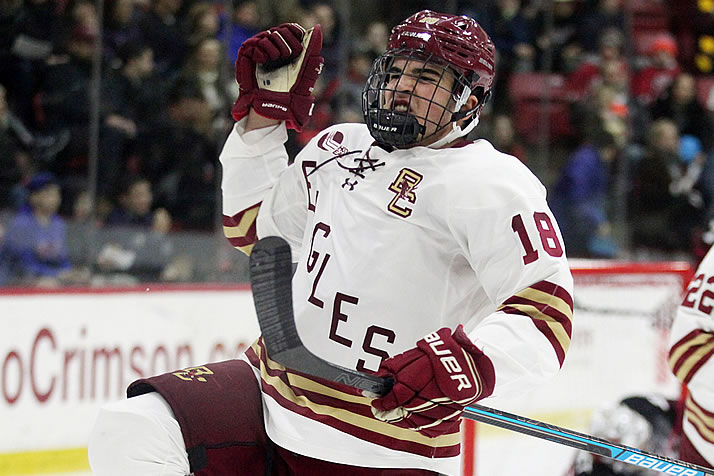 Boston College sophomore Alex Newhook was the national rookie of the year in 2019-20.

Three NCAA players – matching the most in the last 15 years – will represent Canada in the World Junior Championship, as Wisconsin’s Dylan Holloway, Northeastern’s Devon Levi and Boston College’s Alex Newhook all made the roster, Hockey Canada announced Friday.

It marks the second time in four years that a trio of NCAA players have made the Canadian National Junior Team, the most since four made it in 2006. At least one college representative has been on Team Canada for six straight years.

USA Hockey is expected to name the U.S. National Junior Team on Saturday. The 2021 World Junior Championship is set for Dec. 25 through Jan. 5 in Edmonton.

Holloway (Bragg Creek, Alta./Okotoks-AJHL/EDM) is a sophomore forward for the Badgers who has scored two goals in two games this season. A first-round selection of the Edmonton Oilers in 2020, Holloway had 17 points as a freshman, including nine in his final 10 games.

Levi (Dollard-Des-Ormeaux, Que./Carleton Place-CCHL/FLA) is a freshman goaltender for the Huskies who has yet to make his NCAA debut. He was taken in the seventh round by Florida in 2020.

Newhook (St. John’s, Newfoundland/Victoria-BCHL/COL) is a sophomore forward for the Eagles. He shared the team lead in goals (19) and points (42) as a freshman, earning the Tim Taylor Award as the national rookie of the year.