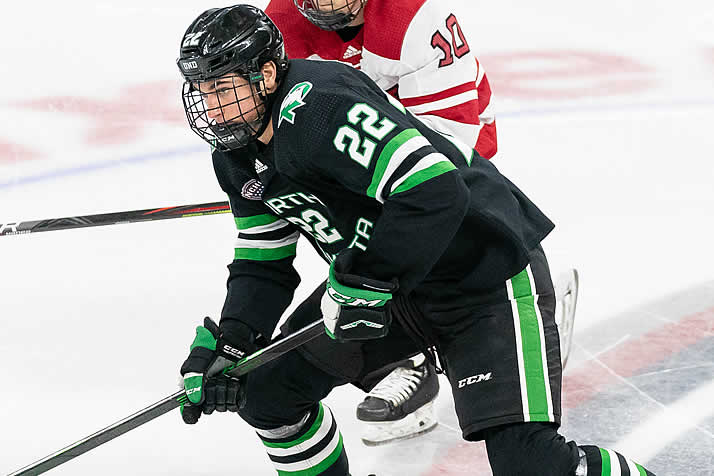 Shane Pinto was named NCHC Player of the Year in 2020-21 (Photo by UND Athletics).

Caufield, McKay and Pinto were selected from the initial list of 10 candidates by the 30-member selection committee and an additional round of online fan voting. Criteria for the award includes: displaying outstanding skills in all phases of the game, strength of character on and off the ice, sportsmanship and scholastic achievements.

Caufield, a sophomore, was a unanimous selection as Big Ten Player of the Year and led the nation in points (52) and goals (30) in 31 games played this season. The first-team all-conference selection and first-round draft pick of the Montreal Canadiens signed an NHL contract following his season.

McKay, a junior, led the Mavericks to their first Frozen Four and was a Hobey Baker top-10 finalist for the second year in a row. The WCHA Player and Goaltender of the Year has 10 shutouts this season and 24 in his career – both just two shy of the NCAA records.

The winner will be announced Friday, April 9, in a live broadcast on NHL Network at 6 p.m. ET. The 41st annual Hobey Baker Award show will also include the announcements of the Hockey Humanitarian Award, the East and West All-America Teams and the Mike Richter Award for the nation’s top goaltender.