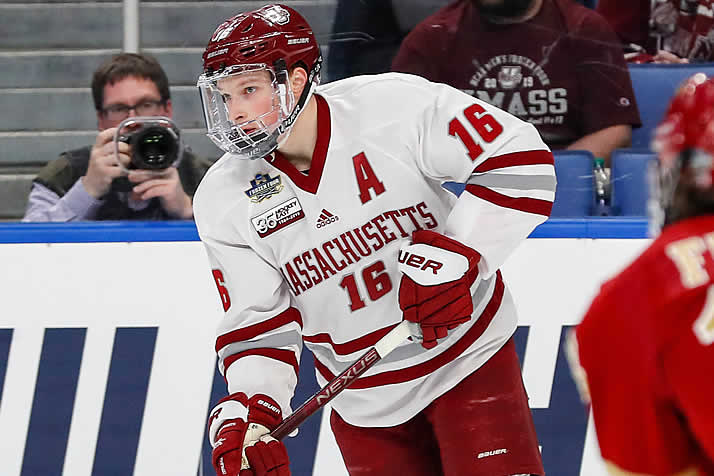 With the puck set to drop in Pittsburgh at the NCAA Frozen Four, the National Post in Canada took a look at the growing path from north of the border to the NCAA.

Scott Stinson, the national sports columnist for the National Post, connected with Cale Makar’s father, Gary, to reflect on Cale’s path to Massachusetts and his experience in college.

“To me, it’s just very logical to go that college route,” Gary Makar told Stinson. “The NCAA gives you a lot more time to develop. We all get stars in our eyes about how well these young kids are doing, but the reality is that you get some more time (in college). You don’t need to be in a rush.”

Stinson points to Makar’s path as a model for future Canadians – from his younger brother, Taylor, to others eyeing an NHL opportunity and an education:

It has, obviously, worked out just fine. Cale’s younger brother, Taylor, is committed to the UMass team for next season.

Gary Makar knows that stories of Cale and kids like him will change the perception of the NCAA.

“The information that’s out there to try to help Canadians understand the NCAA is 10 times more than it was, but it’s nothing like what we were exposed to with the Canadian Hockey League,” he says. “It is still the I’m-Not-Quite-Sure-About-It route. But the successes of guys like the Tyson Josts and the Cale Makars will cause people to go, hey, what’s this route now?”

The National Post is the flagship publication of Postmedia Network, which includes papers across Canada. Learn more at nationalpost.com and follow columnist Scott Stinson on Twitter @scott_stinson.