NCAA Readies for Historic NHL Draft
As many as five of the top 10 picks could be college players. 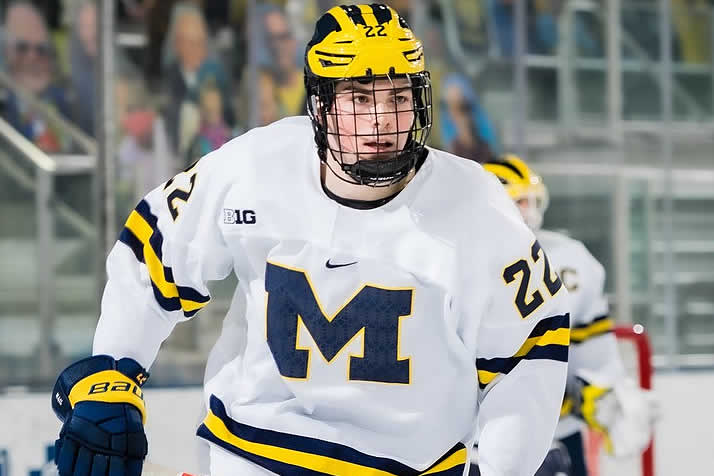 Michigan’s Owen Power is projected to be the No. 1 overall pick in the 2021 NHL Draft (Photo by Michigan Photography).

The 2021 NHL Draft projects to be a historic one for NCAA hockey. We could see:

NHL DRAFT BY THE NUMBERS

189 – NCAA players selected by the Montreal Canadiens in NHL Amateur/Entry Drafts, the most of any franchise

173 – NCAA players drafted in the first round since 1964 (St. Lawrence’s Alex Campbell was the first)

25 – Consecutive years with a draft pick for Boston College and Michigan (starting in 1996), tied for the second-longest such streak for any school in history (Minnesota had picks in 27 straight drafts, 1974-2000)

25 – First-round picks to play for Michigan, the most of any school

17 – Age of Vermont’s Dovar Tinling for all but one game this year; the youngest player in Division I, he turned 18 on March 3

4 – The most top-10 picks in one draft to play NCAA hockey (2006: Erik Johnson, Jonathan Toews, Phil Kessel and Kyle Okposo)