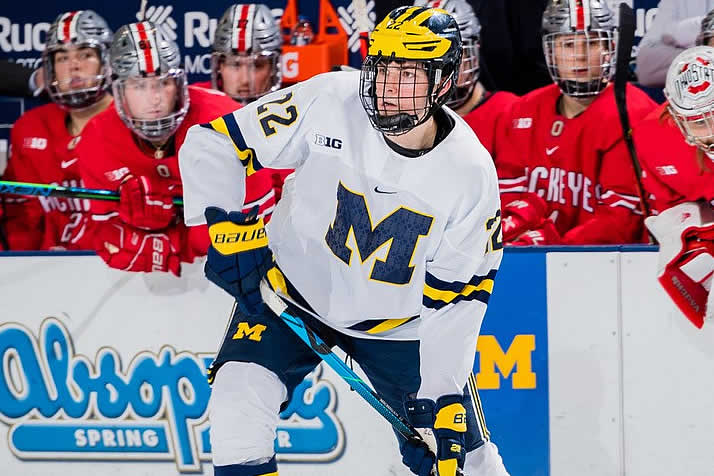 Michigan rising sophomore defenseman Owen Power (Mississauga, Ont./Chicago-USHL), at No. 1 overall, led a parade of nine NCAA players and recruits selected in the first round of the 2021 NHL Draft, held virtually Friday night.

More than half of the NCAA selections represented Michigan, as Power and his teammates made up four of the top five selections and five total in the first round.

Those were both firsts, as the draft saw:

Power’s selection at No. 1 was followed by Matty Beniers (Hingham, Mass./U.S. NTDP), taken by Seattle at No. 2. Incoming Michigan freshman Luke Hughes went No. 4 to New Jersey, while Kent Johnson (Port Moody, B.C./Trail-BCHL) went to Columbus at No. 5.

Power and Johnson were joined by fellow Canadian Corson Ceulemans in the first round; Ceulemans, an incoming Wisconsin freshman, was selected by Columbus at No. 25. All three Canadian picks attended College Hockey Inc. Summits in their home cities as younger players.

A total of 185 NCAA players have been selected in the first round in the history of the NHL Draft.

Rounds two through seven of the 2021 NHL Draft will be held Saturday beginning at 11 a.m. ET. Television coverage will be provided by the NHL Network in the U.S. and Sportsnet in Canada.