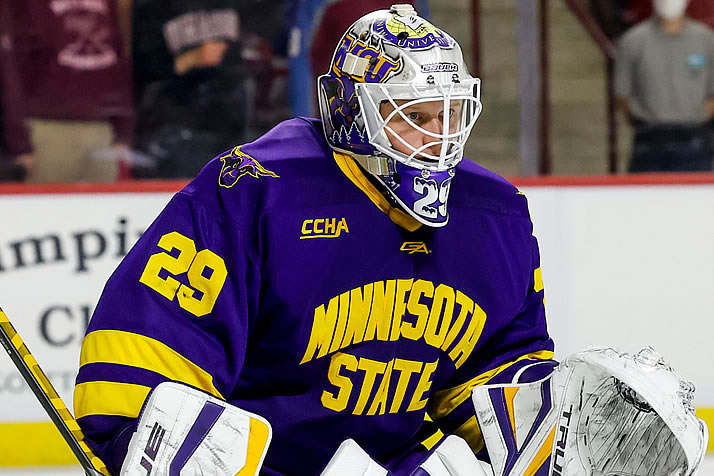 One of the most decorated goaltenders in the history of NCAA Division I men’s hockey, Minnesota State senior Dryden McKay captured the top individual honor in the sport Friday when he was named the 2022 Hobey Baker Award as the nation’s top player in college hockey.

Another goaltender, Northeastern’s Devon Levi, won both the Mike Richter Award as the nation’s top goaltender, as well as the Tim Taylor National Rookie of the Year Award. Both netminders were also named first-team All-Americans, McKay in the West and Levi in the East. The announcements headlined the awards show televised live on NHL Network Friday, on the eve of the national championship game. The complete list of individual honorees:

McKay has gone 38-4-0 in 42 appearances this season, setting a new NCAA single-season record for wins. The Downers Grove, Ill., native also posted a sparkling 1.27 goals against average, .934 save percentage and 10 shutouts en route to becoming the first goalie since Ryan Miller in 2001 to capture the Hobey Baker Award.

McKay and Levi were joined as ACHA West All-Americans by fellow Hobey “Hat Trick” finalist Bobby Brink of Denver, who landed on the second team.

Michigan topped all teams with three West selections; forward Matty Beniers was a first-team honoree while the defense duo of Luke Hughes and Owen Power each earned-second team honors. In the East, Northeastern led all teams with three All-Americans – goaltender Devon Levi and forward Aidan McDonough on the first team, and defenseman Jordan Harris on the second team.