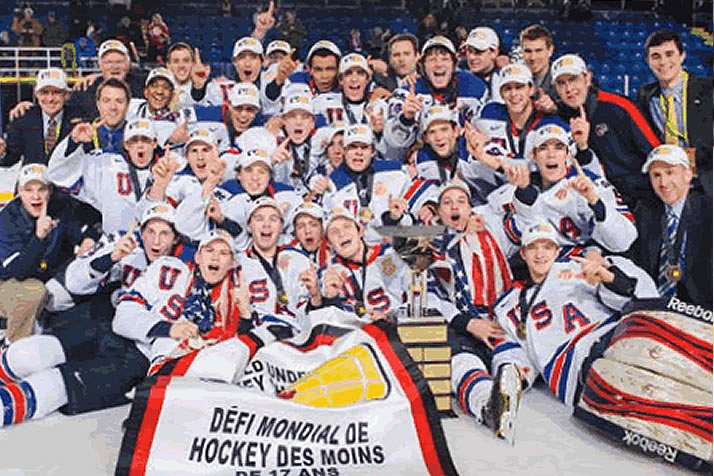 Sixteen college recruits led the United States to the championship at the 2014 World Under-17 Challenge, held Dec. 28-Jan. 4 in Cape Breton, Nova Scotia.

The event featured 10 teams, five of them from regions in Canada. The U.S. beat one of those Canadian teams, Pacific, 4-0 in the championship game.

The 22-player U.S. squad was comprised of players from the U.S. Under-17 Team at the National Team Development Program and included commits to 10 different Division I programs. Boston College had three recruits on the roster, while Harvard, Michigan, Notre Dame and Wisconsin had two each.

Two of those BC recruits - forward Colin White and defenseman Noah Hanafin - earned all-tournament honors. U.S. goaltender Michael Lackey, a Princeton commit, posted the shutout in the championship game and was also named to the all-tournament team.

"This is a fun group of kids to work with," said Don Granato, head coach of the U.S. Under-17 Team and a former star at Wisconsin. "We never lost focus throughout the tournament and continued to get better each game."

The championship was the fourth at the event for the U.S., and marked the eighth straight time Team USA finished in the top three.

Four other college commits, including three to Western Michigan, played in the tournament for Canadian teams.

Recruits on the World Under-17 Challenge Championship Team