COVID Impact on NCAA Rules
Due to the pandemic, the NCAA has adjusted several regulations. 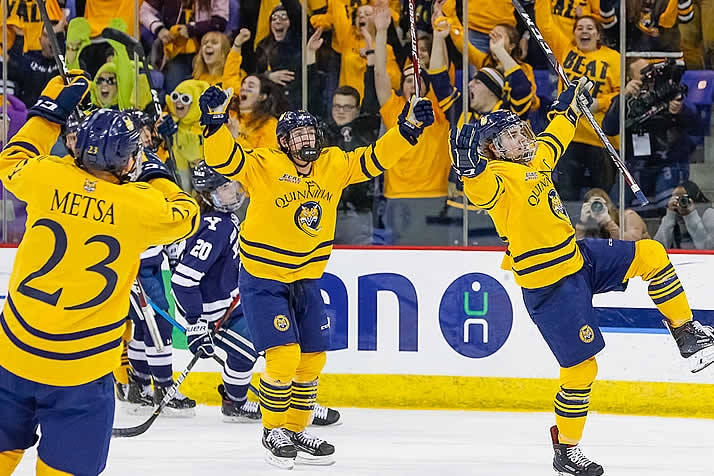 In the face of the COVID-19 pandemic, the NCAA has adjusted several rules that could impact current and prospective student-athletes.

The NCAA has created a section of its web site devoted to COVID-19 that is a valuable resource. Below, College Hockey Inc. has summarized some of the key points that could specifically impact current or future NCAA Division I men’s hockey players.

College Hockey Inc. will update this page as additional rulings or interpretations are released by the NCAA.

Winter sport student-athletes who compete during 2020-21 in Division I will receive both an additional season of competition and an additional year in which to complete it, the NCAA Division I Council announced.

The NCAA has instituted a recruiting dead period through May 31; the regular recruiting calendar goes back in effect June 1.

During dead periods, college coaches are prohibited from any in-person recruiting, either on- or off-campus, including evaluations. As always, coaches can watch games online to scout prospects. They also may be in contact with prospective student-athletes of appropriate age via phone, email, text, etc., and players entering junior year (grade 11) or older can make verbal commitments to schools.

The National Letter of Intent signing period began on Nov. 11 and runs through Aug. 1.

College Hockey Inc. gathered three NCAA coaches to get their advice to recruits during the dead period.

Over the next year, the Division I Committee on Academics plans to review the use of test scores as part of NCAA initial-eligibility standards moving forward.

Prospective student-athletes will still need to meet minimum grade-point averages in NCAA core courses to be eligible for Division I competition as freshmen.

Student-athletes enrolling in a Division I school during the 2021-22 or 2022-23 academic years will be academically eligible by earning a 2.3 grade-point average in 16 NCAA-approved core courses. Students who spend some or all of high school in the United States must complete 10 core courses (seven in English, math and science) by the start of their seventh semester in high school (prior to senior year).

The NCAA has altered the way it computes grade-point values for pass/fail courses taken in the 2020-21 academic year. For courses completed with a “pass” grade, the Eligibility Center will apply the credit earned in those courses toward the core-course requirement. If the core GPA would increase by assigning a value of 2.3, that value will be assigned to passed courses. If the 2.3 mark would decrease the student’s overall GPA, the core-course GPA will be calculated based only on courses with assigned letter grades from other terms. This policy will apply to students from all grade levels who successfully complete NCAA-approved pass/fail core courses in 2020-21.

The Eligibility Center has also extended its policy to not require a separate review of distance, e-learning or hybrid programs offered by schools with NCAA-approved core courses during 2020-21 in response to COVID-19. Students are encouraged to complete their courses as recommended by their school, district or state department of education.

NCAA Customer Service is available to answer specific eligibility questions Monday-Friday, 9 a.m.-5 p.m. Eastern time at 877-262-1492 (domestic students and Canadian students outside of Quebec) and for international students including Quebec at ncaa.org/contactinternational.

For the 2020-21 academic year, prospective student-athletes who turn 21 years old during the season (i.e., early 2000 birthdates) will not lose a year of Division I eligibility if they play a junior hockey game after their birthday. Typically, those players would have to enroll full-time in a post-secondary institution in order to retain their four years of Division I eligibility.

Current student-athletes whose institutions will not be playing hockey during the fall semester will be permitted to participate in non-collegiate, amateur competition on an outside team during the fall 2020 term (subject to school and conference approval). These student-athletes may compete on an outside team while remaining enrolled in their NCAA institution, which typically would not be allowed.

An institution or conference may not provide expenses for such competition and the student-athlete must be in good academic standing. A student-athlete who remains enrolled at the institution may not miss class (including live online class) to participate in outside competition. All competition should adhere to federal, state, local and other applicable guidelines related to COVID-19.