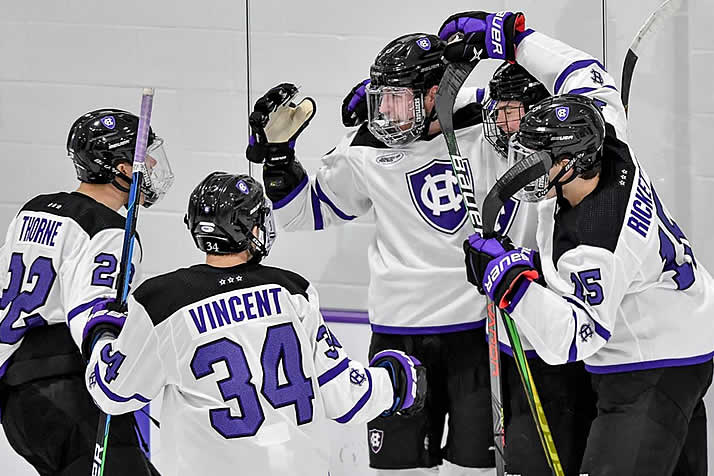 Holy Cross last participated in the Ice Breaker Tournament in 2010 in St. Louis.

The Ice Breaker Tournament, the traditional start to the college hockey season, will head to Worcester, Mass., and the campus of Holy Cross in 2021, as the Crusaders host Boston College, Northeastern and Quinnipiac for the four-team tournament.

"I'd like to thank College Hockey Inc., and the Hockey Commissioners Association for the opportunity to bring this great event to Worcester," Holy Cross Director of Athletics Marcus Blossom said. "We look forward to hosting three of the nation's top teams at the Hart Center and to providing a unique game day experience to jumpstart the 2021-22 hockey season."

The 2021-22 season will feature two Ice Breakers, as the 2020 edition, scheduled for Duluth, Minn., was postponed due to the COVID-19 pandemic. The Holy Cross Ice Breaker Tournament will be held Oct. 8-9, with the event in Duluth tentatively set for Oct. 15-16.

This unique year, with two Ice Breaker Tournaments, celebrates the 25th anniversary of the event, which began in 1997 in Madison, Wis. The tournament brings together four teams to celebrate the start of the college hockey season.

Holy Cross will welcome three teams currently in the USCHO.com Top 20 including No. 1 Boston College.

"It is an honor to be selected to host the 2021 Ice Breaker Tournament," said Holy Cross head coach David Berard. "We are grateful for the opportunity to showcase the best of college hockey on our campus at the College of the Holy Cross. I would like to thank Mike Snee from College Hockey Inc. and the Hockey Commissioners Association for their trust in us to host this tournament.

"We have an outstanding field with three traditional eastern powers and Top-10 programs joining us. Thank you to Jerry York, Rand Pecknold and Jim Madigan for their participation. It is an unprecedented opportunity and one that would not have happened without the support and hard work of our Director of Athletics Marcus Blossom, along with our athletic department administration. We are very thankful for their commitment to the growth of our program. We look forward to October and kicking off the 2021-22 season with this great event."