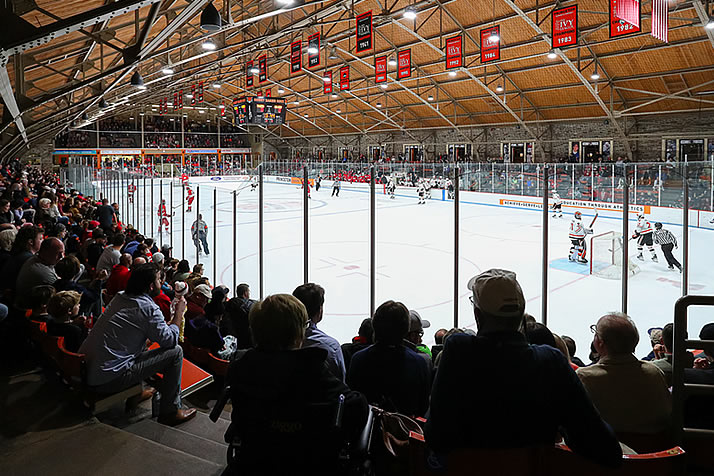 The very first game at Princeton’s Hobey Baker Rink was played on January 5, 1923. One-hundred years later, the Tigers will celebrate “Hobey 100 Weekend” at one of college hockey’s most storied venues.

Princeton hosts ECAC rivals Harvard and Dartmouth on Friday and Saturday, respectively, shining the spotlight on a series of tributes to the nation’s oldest on-campus arena. The events include a ceremonial puck drop with members of the 141st Aerial Squadron – Hobey Baker’s squadron during World War I – as well as appearances by Princeton alumni and former NHLers George Parros (1999-2003) and Kevin Westgarth (2003-07).

Elsewhere around the country, this week’s top-20 PairWise matchups include:

While college hockey celebrates one of its most revered arenas in Princeton, the sport will also showcase itself at a uniquely non-traditional venue this weekend in Boston.

UConn enters the week tied with Merrimack atop the conference standings.

The weekend kicks off Friday with a women’s doubleheader that features Harvard vs. Quinnipiac, and Boston University vs. Holy Cross.

All four games will be broadcast live on NESN.

A pair of current NCAA standouts will square off for the gold medal tonight at the 2023 IIHF World Junior Championship in Halifax, Nova Scotia.

The Western Michigan forward registered back-to-back hat tricks – the second time he’s done so this season – to carry the Broncos to the GLI title with wins over Michigan Tech and Ferris State. They were Polin’s fourth and fifth hat tricks of the year.

Polin now leads the country with 19 goals in 22 games, three more than he had in 39 tilts a year ago, and he ranks second in the national scoring race with 30 points.

DeNaples, who has three goals and three assists in 22 contests this season, has yet to miss a game in his collegiate career.

From Blueline to Bench:

A former collegiate defense pairing will match wits behind the bench this weekend when North Dakota hosts Lindenwood in a non-conference series Friday and Saturday.

UND head coach Brad Berry (North Dakota, 1983-86) and Lindenwood bench boss Rick Zombo (North Dakota, 1981-84) were defense partners on North Dakota’s 1983-84 squad while Berry was a freshman and Zombo a junior. Both went on to play in the NHL -- Zombo logging 652 contests with Detroit, St. Louis and Boston, and Berry appearing in 241 games with Winnipeg, Minnesota and Dallas.

A trio of standouts were honored by the Hockey Commissioners Association earlier this week for their performances in December.

Bowling Green sophomore F Austen Swankler (North Huntingdon, Pa.) was named HCA Player of the Month after racking up six goals and 15 points in seven December games. He also extended his point streak to 12 games in the process.

Additionally, Long Island freshman F Patriks Marcinkevicks (Riga, Latvia) was named Rookie of the Month, and Alaska senior Matt Radomsky (Winnipeg, Manitoba) garnered Goaltender of the Month honors. Marcinkevicks had a nation’s-best 11 assists in seven contests, while Radomsky went 5-0-0 with a 1.04 GAA and .955 save percentage.

“I speak for probably every Michigan hockey player when I say the GLI is something you grow up watching, and something that really catches attention and opens eyes. Everybody sees the big stage and the level of players and teams at this level, and it makes it surreal to be able to be a part of it.”

Los Angeles G Pheonix Copley (Michigan Tech, 2012-14) is riding a career-best seven-game winning streak and has rattled off a 9-1-0 record since being recalled from AHL Ontario in early December. His seven wins since Dec. 15 are tops among NHL goaltenders.

The 30-year-old native of North Pole, Alaska, boasts a 2.52 GAA and .908 save percentage on the season while limiting his opponents to two goals or fewer in seven of his 10 starts.

Did you know? 93% of NCAA Division I men’s hockey players earn their degree!