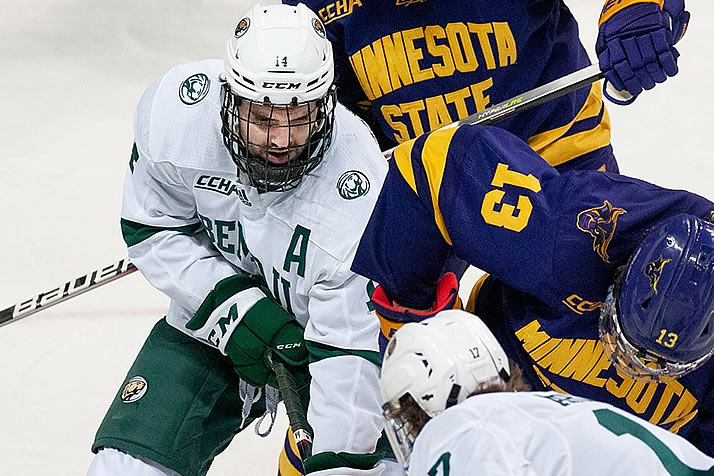 With the NCAA Division I Men’s Hockey Selection Show just days away, six conference playoff champions will be crowned this weekend at sites across the country:

For conference playoff brackets and additional information, visit the tournament homepages below:

The Hobey Baker Memorial Award Committee unveiled the 10 finalists for the 2021-22 season on Wednesday, as chosen by a vote of Division I men’s head coaches and online fan balloting. The list of 10 included six forwards, three goalies and one defenseman:

The three “Hobey Hat Trick” finalists will be announced March 31, with the winner to be unveiled April 8 during the Frozen Four in Boston.

Several former and current NCAA standouts have been dealt in the week leading up to Monday’s NHL trade deadline:

Track all of the NHL comings and goings with the College Hockey Inc. NHL Matchup Tool.

Eleven players have already reached the 20-goal plateau this season, the most in NCAA Division I men’s hockey since 2017-18 when there were 18 … Western Michigan’s Ethen Frank (UDFA) leads the country with 26 goals and is aiming to become the first Bronco in program history to top the nation in that category … Denver junior forward Bobby Brink (PHI) holds a seven-point lead in the national scoring race, having racked up 55 points (14 goals, 41 assists) in 36 games. Denver’s last (and only) national scoring champion was Ed Beers, who amassed 84 points in 42 games during the 1981-82 campaign … The 2021-22 Mike Richter Award finalists will be announced by the Hockey Commissioners Association (HCA) on Thursday, March 24.